This update will be different.  This time, the Chromomancy part will come before the writing part.  Why?  Because.

So a previous video showed the first few levels.  There were enemy squares that could be killed.  When killed, they explode into shrapnel.  This shrapnel can be collected and offered to a Pylon which is where the last video ended.  This one:

So the Pylon is essentially a Console window.  Type text, hit enter.  It’s automatically more or less centered.  It looks a bit like this: 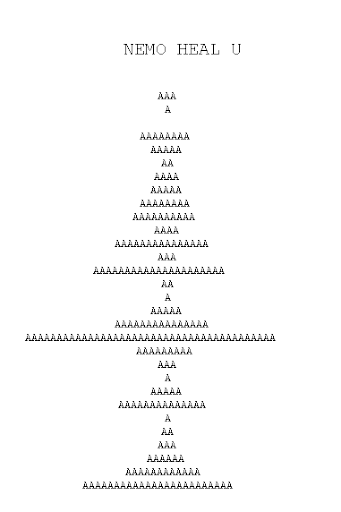 Except the A’s dont mean anything.  This is just a Spade of A’s that looks cool.  The real screenshot of the Pylon looks like this:

The stuff the user types can be distinguished from the output because the input is a verb or a command and the output is a statement.  So if you type HELP, then you get that big block of text.  Typing OFFER 2 GREENS converts 2 of the green shrapnel into energy.  Light energy is very important to have.  Because without light energy, you will lose all your color and dissolve into the background.  I’d make a video, except that would take too long.  Imagine a square of some color, dimming over the course of 30 seconds, before turning black.

If you offer enough shrapnel, you can prevent the darkness from taking over your soul, but you’ll slowly turn gray over time regardless.  Unless you find the super light, which can bring back the saturation of color.  Problem is, the super light has yet to be put in to Chromomancy.  It will be done sometime.

First, something else must be done.  There will be a drawing thingy of something not abstract, but abstracticized.

This is the part where I talk about the color grey.

He awoke in a bed of fine colors
They greeted him with all of their beauty
But he had no color.

They spun about him, sprinkling happiness
Try as they may to give him their colors
Alas, he’s colorblind.

This world, full of prismatic rays
Ignored by the one who lives in grays.

Suffice to say, gray is nothing.  It’s saturation value is 0, so hue is irrelevant.  Without hue, there can be no color.  Now the color grey pops up a few times in the natural world.

The very very first occurrence of grey was before color vision existed.  Before cones existed.  Only rods.  Except this is far before the scope of our  evolutionary memory, so we’ll skip this.

The other two occurrences are clouds and volcano ash.  And the emotional responses to both are responsible for our modern interpretation of this color.

There are two types of clouds.  White and gray.  White clouds do not have a lot of water in them, so it won’t rain.  Grey clouds are the ones that make rain.  And it is not really that optimal to do hunting in the rain.  So we’ve adapted to become sullen and withdrawn when it rains.  Likewise,

There are two types of volcanic eruptions.  The kind that kills everything, and the kind that just blankets everything in ash.  If everything dies, they don’t pass down memories.  So the memories we take have from those who have merely been blanketed.  And again, hunting isn’t very optimal until the grey is gone.

So the color grey causes tiredness, withdrawal, and some other really depressing stuff.  So why not make the main goal of the main character in Chromomancy to just collect as much color s possible without fading to grey?  Find the super light that fills all the grays with color!